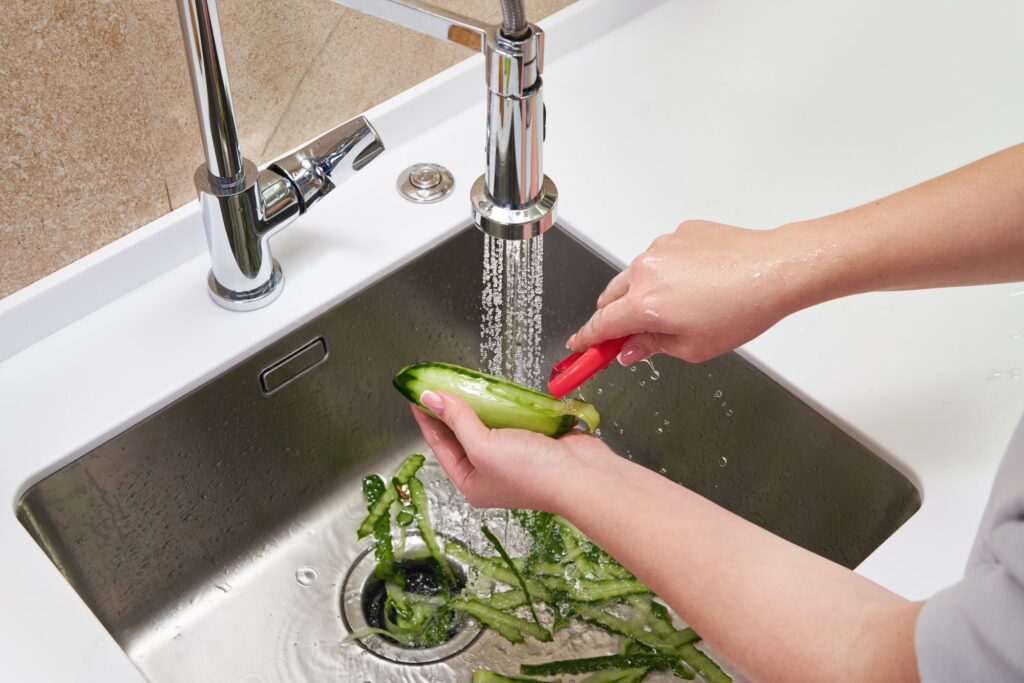 To keep your garbage disposal in the best condition possible, following these maintenance tips:

Use Cold Water When Using

This may feel a bit counterproductive since warm water is known to break down food. However, it can become harmful to your disposal drain. Hot water will break down greasy materials and allow them to move down the drain, which can cause clogging later on. By using cold water, those greasy materials will turn more solid and allow them to move down instead of sticking around.

Some may feel that using it too much will wear it out faster. When it comes to garbage disposals, the opposite is true. Without regular use, you run the risk of corrosion and rust. It also allows all the parts to keep moving, which will prevent waste from getting stuck within it.

The Don’ts Of Your Garbage Disposal

It may surprise you that the impellers of a disposal are blunt. There’s no need to sharpen them with large chunks of ice or eggshells. Doing so will harm your drain more than anything.

We mentioned it above, but it’s vital you know how important it is not to use hot water. Once clogging occurs, you will most likely need some professional help.

Don’t Shut Off The Motor Too Soon

It’s best to keep things running until the food has completely ground up. Once the grinding has stopped, then you can shut it off. However, it’s best to keep the water running for about 15-30 seconds once you’re done to push everything down properly.

Don’t Shove Things Down All At Once

Garbage disposals are meant to take small things in a small amount of time. Avoid large portions of anything, make things as small as possible, and slowly put them in to avoid overloading it.

Top Items NOT To Put Down Your Disposal

We all slip up here and there, and that’s okay. Just don’t make a habit of dropping things down your disposal. Clear the sink before you run it and ensure that there’s nothing hard or heavy ready to go down. Some of the top items you should avoid are included below!

Coffee grounds may make your sink smell better and reduce odors, but they can cause serious damage later on. Think about how coffee grounds work when you remove the filter. They reduce into a dense, thick, and packed mess. No one wants that to build up in their drains and start clogging.

Pasta expands when underwater, which is why we boil it! A few scraps won’t hurt, but don’t go past(a) that! If you leave it in your disposal, not only could it potentially stick to the sides of your drain, but it can continue to expand too.

Chopped, diced, or small chunks might be okay, but the real problem is with the thin membrane that sits below the dry, outer layer of the onion. It’s so thin that it can slip and get wedged in the drain, where it then acts as a net for other food.

Like pasta, oatmeal will expand. If the oats are uncooked, they’re likely to slip through and cause a clog down the line.

You can do a lot with the pits of fruit, but putting them down the disposal isn’t one of them. A good rule is if you can’t cut it with a knife, absolutely avoid putting it down the garbage disposal.

As a bonus, here are five things to never put down your disposal:

Having garbage disposal or drain problems? Give us a call! We can handle any drain and plumbing problems you encounter and give you some tips on avoiding them in the future. Call us today so we can start helping you.

Call The Plumbers You Can Trust!

At any time of day or night, throughout the entire year, Genevie Plumbing will be able to provide a full suite of plumbing services backed by many decades of expertise. We know how much trust you place in plumbers to get the job done, so we try to provide a quality experience from the moment you call until long after we’re gone.